Through fog and wind

Jopavik, a tiny village  on the North-western coast of Iceland, sporting merely three inhabitants during summer, and two during winter, such was our destination.  During a relatively uneventful watch, while hanging from the yard, a steel beam suspended some twenty-fight meters in the air, the weather began turning. Off to port side dark heavy clouds crested the horizon, and cold winds carried a hint of ice in them from the distant  north pole.

The waters below, as if imitating the heavens, took on a dark grey hue. In sheer contrast, to our starboard blue skies above, blue waters below, and a heavy curtain of fog, caused by the difference in temperatures no doubt, began creeping up from the waters. From my vantage point alongside Jorrit and Pavel we could see clearly the point where these two oceans met was, a near perfect line separated one side, dark and gloomy, and the other bright and sunny.

After supper the helmsman brought her to starboard, and although I couldn’t see why at first, it soon became clear, we were going into the fjord. Out of the mist there emerged a mountain peak, a stark outline against the skies, as we approached ever closer the fog began shifting away, as in due reverence of our Wylde Swan, and more parts of this wondrous land unveiled themselves in all of their glory. Mountains dotted with occasional blots of white snow , valleys where the play of shadows created an uncannily beautiful sight, peaks so tall and  grand, that from my humble point of view that it seemed as though they were supporting the skies like mighty columns. It was then Marco handed me a walkie-talkie, gesturing towards her bow, where I was to stand watch for any dangers that might unveil themselves as we sailed through the ever encroaching fog.

How long I stood there I do not know, nor do I care! Despite being assailed by frigid winds, I felt excitement rising within me, a roaring laughter of pure joy burst from between my lips, there was not any place I’d rather be in other than there. Realizing what a fine seat this made, two trainees, Alexandra and Sophia, joined me on the forecastle to take in this breath-taking view, though they proved less resilient then I, they stayed there for quite some time.

To our starboard a keen observer could spot Jopavik in all of its three housed glory, not too far from a beacon meant to guide ships. Following Sophia and Alexandra’s  departure, Titouan clambered next to me with binoculars and in his southern-French accent said: ‘’We’re approaching blinding fog, if you think you see something let me know and I’ll look through the binoculars’’. Fog makes one’s mind do curious things, as it struggles to comprehend nothingness it attempts to fill the void with all manner of things, hence where many a sea legends come from (for instance; the flying Dutchman), and my mind is no different. I was certain there were rocks jutting out, though upon a second look the dissipated into mist.

Through the walkie-talkie Marco’s voice crackled, telling us he had regrettably decided to turn away, seeing this thick a fog in an unfamiliar territory made for difficult anchorage. We turned away, and relieved of our duty, a good thing that, for I am certain that had he not called us down I would scarce have moved from my position for fear of missing even a smidgen of that wonderful sight. 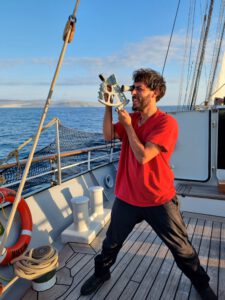 Do you also want experience adventures on the Wylde Swan? Check our expeditions on booking.wyldeswan.com.

PrevPrevious blogThe Wylde swan; a guide to the hesitant traveler. Blog by Bar Ayal
Next blogFifty shades of green | blog from Elvi SmitsNext
View all blogs